WHY SHOULD I TRAIN WITH DAVID DONIS?

A Word From David...

Hi. My name is David and I am originally from Guatemala, but raised in the United States since the age of three. I started boxing at the age of 12. I chose to box because it was a way to build my self-confidence and defend myself against the much bigger kids at school (I was always being picked on).

Realizing that God had given me a talent, boxing became a passion and a way of life for me. My dream was to become a champion. Though a very elusive dream, I captured it in 2002 through many long years of hard work, dedication, determination and political nuances in the sport, becoming the North American Boxing Federation (N.A.B.F.) Champion of my weight division. At the time of my retirement a few years ago, I was still the champ ranked at number three in the world, and was the number one contender in my weight class.

I have started my own business, which I have named Donis Boxing Academy (formerly known as Lone Star Hitters Boxing and Fitness Club). I give personal boxing sessions in West Houston, to everyone at any fitness level. There is no doubt that my sessions will put you in the best physical shape ever. It is like no other!

My program is so good, even other gyms are doing it ! 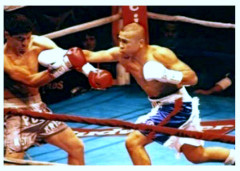